Next time you go to the grocery story and think you've emptied your wallet to pay for your food, consider that Kalamazoo has some of the lowest grocery prices in the nation.

A new study looked at the cost of the 30 most commonly purchased grocery items. No one in America pays less for cooking oil, bread or tuna than shoppers in Kalamazoo.

Kalamazoo pays the least for oil at $3.51 compared to the national average of $5.71 while Seattle pays the most at $8.48

With a large Aunt Millie's baking facility in the city, maybe it shouldn't surprise you that Kalamazoo residents pay the least for a loaf of bread at $1.72. Outside of Washington, DC, Bethesda, Maryland spends the most dough for dough at $4.96 per loaf with the national average $3.08

A can of tuna in Kalamazoo is 72 cents compared to a national average of 97 cents and $1.59 for a can in Portland, Oregon.

Kalamazoo has the 4th lowest grocery prices in the nation behind three cities in Texas, Wichita Falls, McAllen and Temple. Kalamazoo shoppers pay 86% when compared to the national median grocery prices.

The most expensive places for groceries are right where you'd expect them: New York City, Seattle and the San Francisco Bay area.

The source is a national cost of living index and compiled by CouponFollow.com 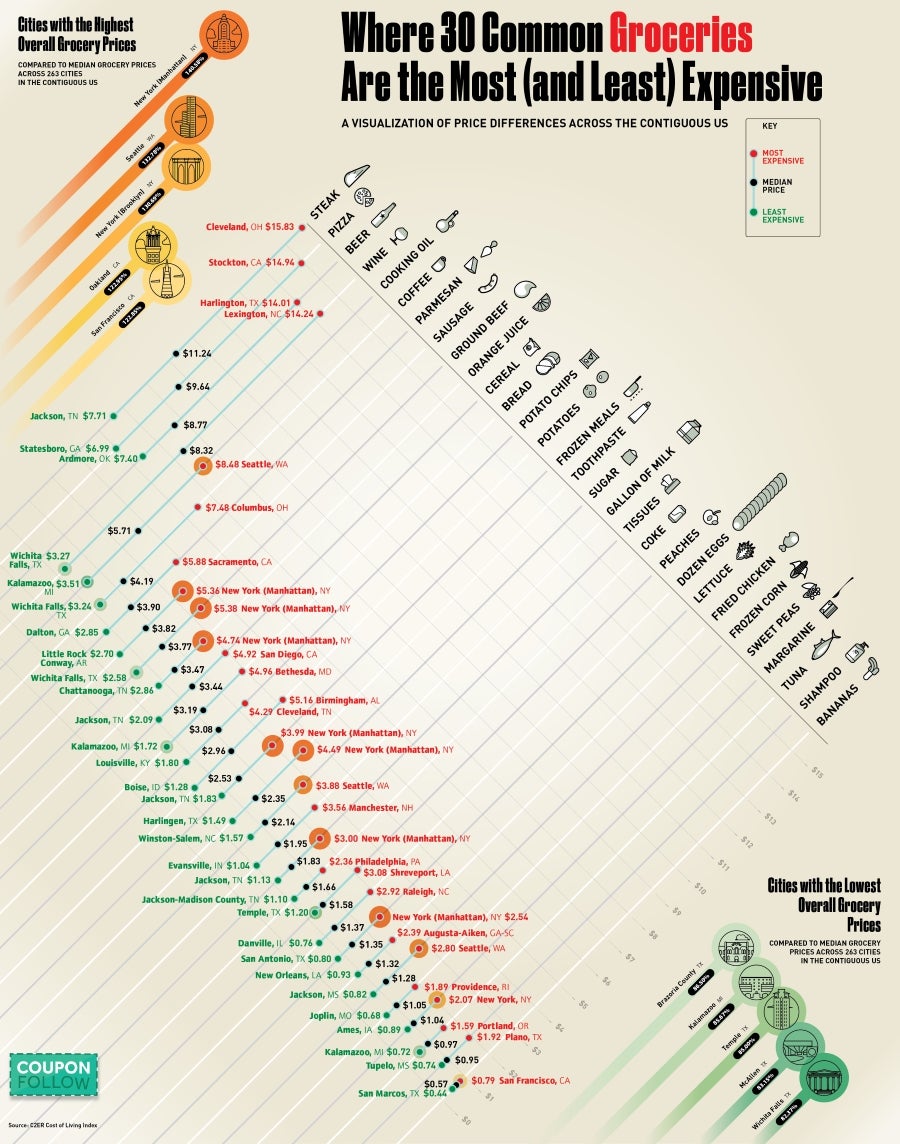 Filed Under: grocery
Categories: Shopping
Comments
Leave A Comment
D&W is Closing Its Portage Store on Romence Road
Fresh Thyme Farmers Market Grocery Set to Open in Portage
Now That Circuit City Is Returning, Let’s Bring Back These Too
One $20 Shot Could Win You a Free Pair Of Brand New Shoes From Crossroads Mall
Obsessed With The Permanent Jewelry Trend? Here’s Where to Find it in West Michigan
Meet Chiefy Tribe: Black Owned Business from Pontiac
Kalamazoo Local Creates the Perfect Gift For Weed-Loving Friends
Snag a New Bike at These 3 Shops in Kalamazoo & Battle Creek
At Least 8 Michigan-Themed Puzzles For When You’re Stuck Indoors